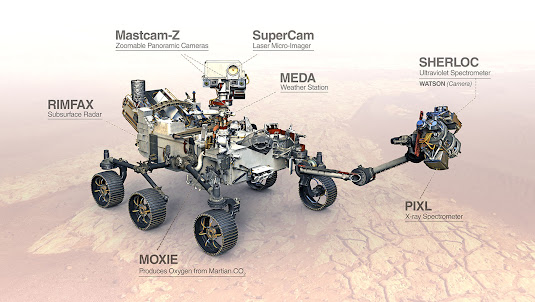 As you know, the work done in the space studies of various countries in recent months has attracted the attention of the whole world.

The spacecraft Perseverance (Azim) of the American National Aeronautics and Space Administration (NASA) landed on the Red Planet Mars with 20 cameras and mini helicopters as part of its "Mars 2020" mission. Perseverance will look for traces of life on the Red Planet, whose distance from Earth varies between 55 million and 400 million kilometers, depending on its orbit around the Sun. (DW)

The first photo of Mars of the United Arab Emirates spacecraft Hope (Hope) has reached the earth. The first photo recorded at a distance of 24,700 km from the planet is on Wednesday, one day after the arrival of the UAE's spacecraft.

With the spacecraft entering orbit of the Red Planet on Tuesday, the UAE became the first Arab country to begin scientific research on Earth's neighbor. According to the BBC, Hope, which was launched from Japan in July last year, will not land on Mars, unlike the spacecraft of China and the USA. (BBC)

China announced that the spacecraft named Tianven-1 (Questions to Heaven-1) entered the orbit of Mars. China sent a spacecraft to the Red Planet for the first time.

All these developments may also herald a space camp to be established in the near future. For all these nice developments about space, you can follow the Twitter account of Turkish Engineer Umut Yıldız working at Nasa.

These developments, of course, concern the Education World soon, because all of the space agencies that carry out these studies want children and young people to contribute to space studies. For this reason, they prepared a simulation that could discover Mars and use and experience NASA's tool Curiosity on the surface of Mars. With this simulation, which I think young people and children will enjoy, I hope they will understand that they are going to a really different planet and that this is really done, not a dream.

If you want to watch about Perseverance on Youtube: